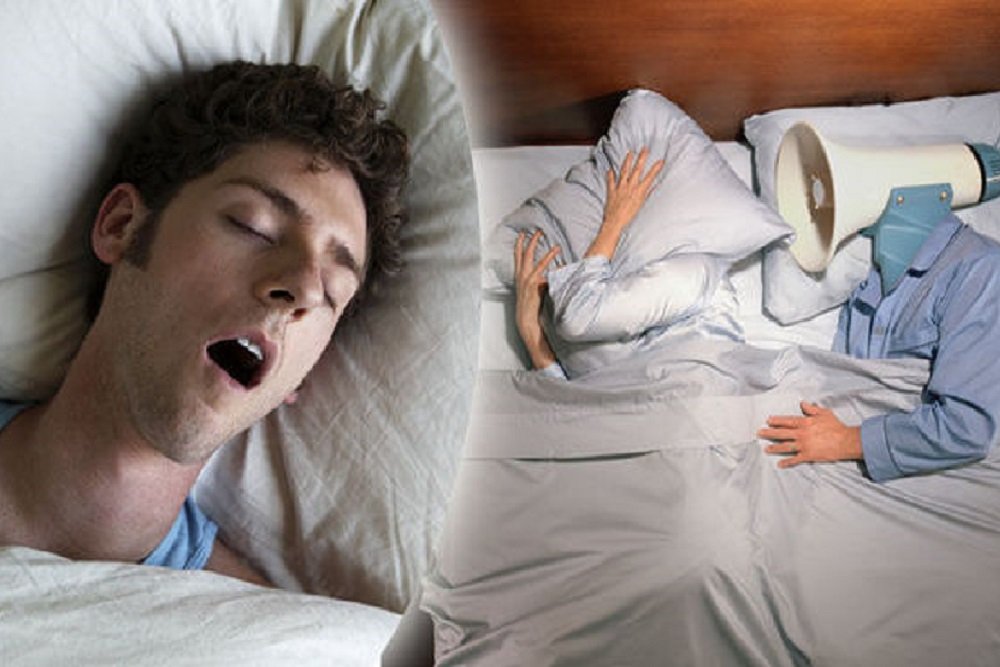 Sleep apnea exists in two forms: obstructive sleep apnea (OSA), the most common type, and central sleep apnea, a more rare version caused by nervous-system problems. With OSA, the upper airway becomes obstructed—usually because the throat muscles that keep the airway stiff relax too much, collapse, and block breathing. The brain senses the drop in blood-oxygen levels and briefly wakes you up to kick-start breath. An “apnea,” or cessation of breath, typically lasts 10 to 20 seconds and occurs 20 to 30 times an hour.

Because you wake up so briefly, you typically don’t remember it. For that reason, many people go undiagnosed. Nonetheless, more than 12 million Americans suffer from the condition, according to the National Heart, Lung, and Blood Institute. Symptoms include excessive daytime sleepiness, morning headaches, irritability, difficulty concentrating, memory problems, frequent nocturnal urination, and lowered libido. If these symptoms sound all-too familiar, it’s time to consult your doctor, because sleep apnea carries serious health ramifications as well. The condition starves your body of oxygen. In response, the body releases stress hormones that strain your heart; your metabolism changes, making you more insulin resistant; and you miss out on sleep’s rejuvenating effects, impairing immunity, memory formation, and repair of muscles and other tissues.

No wonder, then, that research has shown undiagnosed sleep apnea increases the risk of heart disease (including heart attacks, strokes, and high blood pressure), diabetes, obesity, depression, and more, says Ralph Pascualy, MD, medical director of Sleep Medicine Associates at Swedish Medical Center in Seattle and the author of Snoring and Sleep Apnea. In fact, sleep apnea nearly doubles the risk of premature death, according to a 2009 Johns Hopkins study.

Several factors increase your chances for sleep apnea— from weight gain to excess throat tissue. Most sleep-apnea sufferers exhibit more than one cause, so you have to address them all to find the right cure.

Many doctors first try to treat the condition with dental appliances, such as a mouth guard–like device that holds the jaw forward, or a retainer that prevents the tongue from flopping back. Two problems: The devices address only one factor (such as a large tongue), limiting the effectiveness; and people find the devices uncomfortable, so nearly half stop using them. The same goes for continuous positive airway pressure (CPAP), which uses a nose mask to deliver pressurized air into the airway, preventing it from collapsing. CPAP is almost always effective, says Pascualy, but it can cause dry or stuffy nose, headaches, and trouble sleeping, which is why less than 50 percent of patients continue use.

Another conventional remedy is surgery to cut away oversized tissues like the soft palate. But the problem there, says Walter Fong, DC, a chiropractor in Laguna Beach, California, and author of SnorØ Terminator: Your Deadly Snoring/Sleep Apnea, is that it only addresses one cause, making it marginally effective.

Fortunately, science-backed alternative options exist to treat sleep apnea. Bear in mind, however, that since the root causes behind sleep apnea vary, a remedy that cures one person might do nothing for another. “You need a combination that’s right for the individual,” Pascualy says. Experiment with some or all of these, and see which work for you.

1. Trim Down. Shedding about 10 percent of your body weight can send sleep apnea into total or near-total remission, according to a 2009 Archives of Internal Medicine study involving more than 260 obese, diabetic participants with sleep apnea. In fact, losing just 5 or 10 pounds improves symptoms, while gaining 5 to 10 pounds worsens them.

2. Avoid Alcohol. As a sedative, alcohol deepens sleep, relaxing the muscles and making them more prone to collapse, says Pascualy. Alcohol also depresses breathing and makes it harder for your brain to rouse you from sleep, so the apneas become more frequent and severe. Avoid alcohol six hours or more before sleep. For similar reasons, avoid sleeping pills, and talk to your doctor about any headache or allergy medications.

4. Clear Your Sinuses. If your nose is chronically stuffy, identify potential allergens in your environment (pollen, dust, pet dander) or intolerances in your diet (dairy, wheat, or mucus-producing foods like bananas). An allergy doctor can screen for sensitivities, or you can keep a log of the foods you eat, your environment, and congestion levels. You might also try elimination diets, in which you cut out suspect foods for a couple of weeks, and see if the stuffiness eases. Once you’ve identified any allergens, you can work on avoiding them. At night, you can further clear your sinuses, Pascualy suggests, by rinsing them with a neti pot or saline sprays.

5. Quell Inflammation. Low levels of inflammation are normal: When you have a cold or cut your finger, the immune system produces inflammatory cells to fight infection or heal the wound. However, for reasons not entirely understood, diets high in fat, sugar, or processed foods, and a sedentary lifestyle can cause chronic inflammation. This has been linked to sleep apnea, as revealed by several new studies, including one in the July 2009 issue of the journal Thorax. Although researchers are still unraveling chronic inflammation’s connection to sleep apnea, “inflammation might impair the function of nerves, including the hypoglossal nerve, which controls the tongue and keeps it from falling back into the airway,” Pascualy says. Shun inflammation-causing saturated fats (limit them to 10 percent of your daily calories), trans fats, refined grains, excess sugar, char-grilled foods, cigarette smoke, and chronic stress.

6. Strengthen Your Throat Muscles. “The muscles of the airway are like the muscles in the arm or leg,” Fong explains. “They can get weak without proper exercise or with age.” When that happens, the airway structures don’t stay in their proper anatomical position and collapse into the air passageway. But, says Fong, by strengthening, toning, and reeducating the airway musculature, including the tongue, jaw, lips, and soft palate, you can alleviate, or even eliminate, the condition.

Fong (a former snorer) developed a series of exercises to rebuild throat musculature. One exercise, for instance, has you keep your tongue on the floor of your mouth, with your lips closed, for about 10 minutes, twice a day. Fong says that most of his patients’ sleep apnea disappears within one month of starting these exercises.

Something else to try: Play the didgeridoo. A 2006 study in the journal BMJ found that playing this long, wooden wind instrument significantly improved sleep apnea and snoring in people with moderate apnea. Native to Australia, the didgeridoo requires circular breathing in which you inhale through the nose and exhale through the mouth, thereby retraining the upper-airway muscles.

Although larger studies are needed, the didgeridoo option surmounts the compliance problems that plague CPAP and dental devices. “The participants were highly motivated,” wrote the researchers, “and practiced, on average, almost six days a week, which was even more than the protocol asked for.” No studies have been done on other instruments, but theoretically, any activity involving circular breathing might help.

7. Try Acupuncture. A 2009 study at the Yueyang Hospital of Integrated Chinese Medicine and Western Medicine, Shanghai, found that three to five acupuncture sessions a week, for a total of 30 sessions, reduced the number of apneas each night. Additionally, in a 2007 placebo-controlled study in Sleep Medicine, one acupuncture treatment a week (for 10 weeks) improved sleep apnea’s severity by 79 percent. It’s thought that by removing blockages in the body’s qi, or energy flow, acupuncture restores healthy function to the nerves and muscles controlling the upper airway.

8. Sleep on Your Side. Lying on your back makes it easier for the tongue and other tissues to fall back and block the airway, says Pascualy. Some sleep apnea sufferers even sew a pocket into the back of their pajamas and place a tennis ball in it to prevent themselves from rolling onto their backs. Elevating your head with extra pillows may also help.

9. Get Moving. In a May 2009 Sleep study, a four-month exercise program (three 60-minute sessions per week) significantly reduced the severity of participants’ obstructive sleep apnea, most likely by improving the function of blood vessels and nerves—including those that regulate breathing.

The Causes of Sleep Apnea

1. Extra Pounds. More than 50 percent of people with sleep apnea are also overweight. “Fat deposits on the throat change the airway’s shape,” says Ralph Pascualy, MD. “It goes from being circular to ovoid, which is structurally weaker and collapses more easily under weight or when the muscles relax.”

2. Nasal Obstruction. Being chronically congested (think allergies) makes it harder for air to pass into the throat, aggravating apnea. A deviated septum or small sinuses also can hamper breathing.

3. Tongue-Nerve Problems. The hypoglossal nerve is the main nerve controlling tongue movement. If it doesn’t fire properly—for example, because of diabetic neuropathy (nerve damage from high blood-sugar levels)—the tongue relaxes too much and blocks the throat, Pascualy says. Only specific medical tests can measure nerve function.

4. Excess Mouth and Throat Tissue. If you inherited a large tongue, large tonsils, or a fleshier soft palate (the roof at the back of the mouth), they can obstruct the airway at night. Self-evaluation is tricky (how large is too large?), so get a doctor’s opinion.

5. Small Jaw. If you were born with a small jaw (again, your doc can determine this), you might have insufficient space for your tongue, which can then block your throat.

A spouse or partner is usually the first person to “diagnose” sleep apnea, since he or she is the one kept (frustratingly) awake by it. If you notice any of the signs below, encourage your significant other to see a doctor, for the sake of his health and your sanity.

Note: If your spouse snores and doesn’t have apnea, you still may want to seek treatment. Since snoring results from a partially obstructed airway, the snorer isn’t getting optimal amounts of oxygen. Also, serious snoring can be a precursor to sleep apnea.